I have always been interested in history and military history in particular. I suppose it started when I was a boy and my dad bought me my first plastic soldiers, or "little men" as I called them. And in 1963 my Grandmother bought me the American Heritage Golden book of the Civil War.

From there I moved on to "cardboard armies." Board games simulating real military battles and campaigns.

With the advent of computers, I made the jump to computer games by such companies as Talonsoft, HPS Simulations and John Tiller Games just to name a few.

Since "semi retiring" I have gone full circle and rediscovered the plastic soldiers of my youth. Things have certainly changed a lot since then! A hobby I thought was dead or dying when I first started these in February, 2014 has expanded greatly and thanks to ebay and the internet, scouring hobby shops looking for material is no longer necessary.

Since I live in Arizona now, it seemed to make sense to start with scenes that included desert and sand. This also hade "sand tables" make more sense. To this end, I chose three directions:

1. The French Foreign Legion in Algeria and Morocco in the late 1800's and early 1900's. (which started this insanity) was also inspired by the classic 1939 movie Beau Geste which my sons and I watched innumerable times when they were young..

2. The desert Southwest where I live and where the Apaches, US cavalry, miners and the countless western movies were located. John Ford, John Wayne, Gary Cooper, Ward Bond, Clint Eastwood and all the rest of the stars.

3, The North African desert campaign during World War two from 1940-1941 where Rommel's Afrika Korps and the British Western Desert Force, (later the 8th Army) struggled back and forth with each other and the harsh environment for nearly 3 years.

The figures were either purchased or assembled and or modified from kits and then hand painted.

The vehicles were either purchased assembled or assembled from model kits.

The buildings also were either assembled from models or fabricated from lego's, cardboard, leather, mastic and grout.

All the elements are made to look weathered or dirty and no attempt was made to paint eyes, beards or other minute details that tend to made military miniatures look like mannequins or toys.

The backgrounds were added with photoshop. If you notice also the same props and sets accommodate many different views.

I hope you enjoy looking at these as much as I do making them and maybe get a little look at historical context along the way!

Click on any of the photos to bring you to more of similar genre.

Any comments or corrections please feel free to e-mail me. 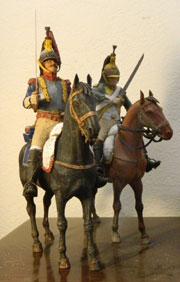 Click on any of the photos to bring you to more of similar genre. 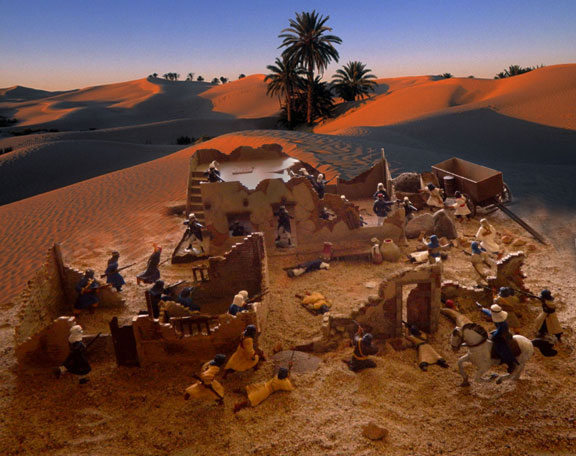 A dawn attack by Tauregs. Dramatic lighting effects add to the drama. 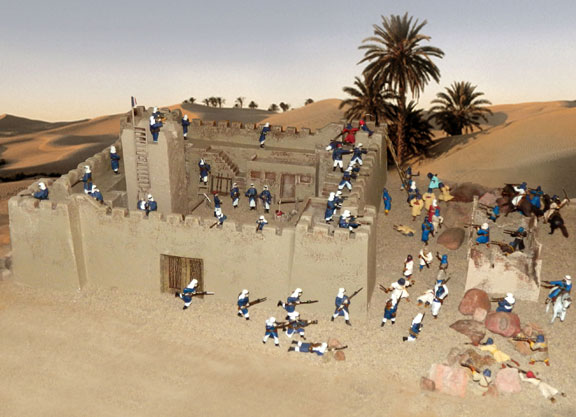 A counter attack from the garrison... 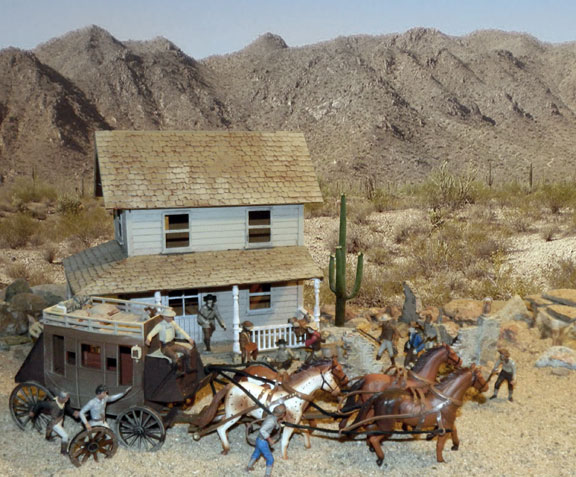 This stagecoach way station i skeeping the horses and passengers on the move.. 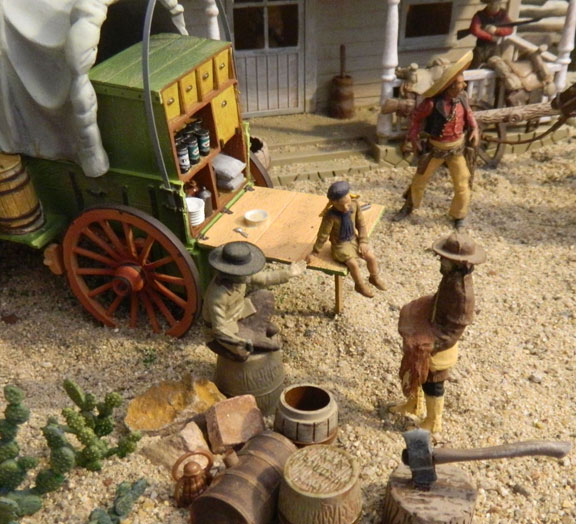 A trader on back of the chuck wagon dickers with a trapper. 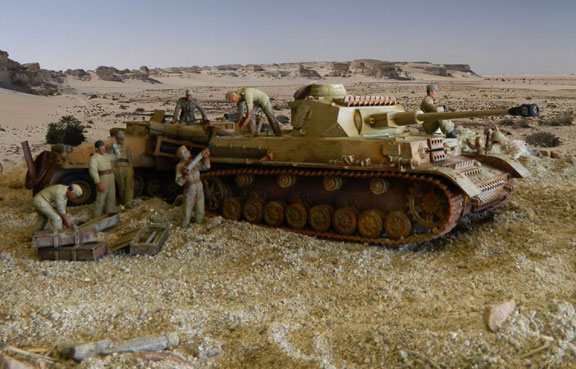 Unlike in the movies, tanks don't have an unlimited supply of ammunition. Here the crew relaxes while a supply unit resupplies the Mark IV tank with shells. 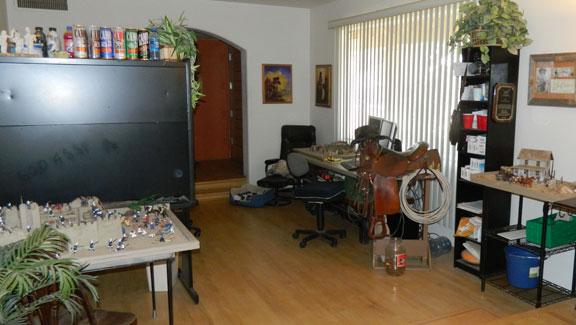 ..... and this is where they all reside. In my in home office in Phoenix, AZ. 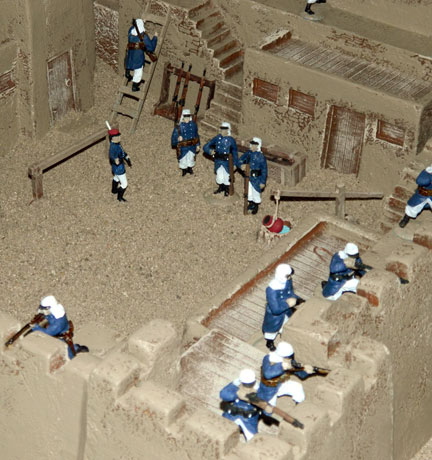 A bird's eye view into the fort... 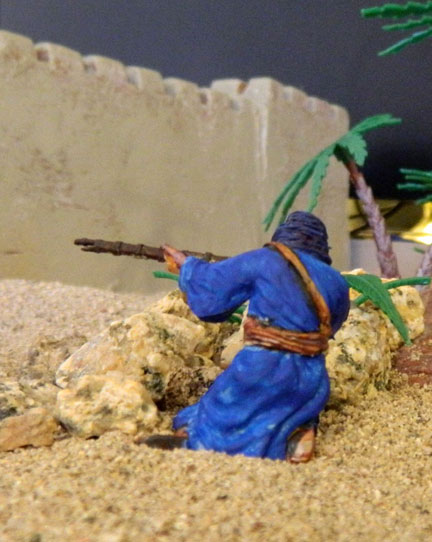 close up shots are in every set (just like the movies).. here a Taureg takes aim... 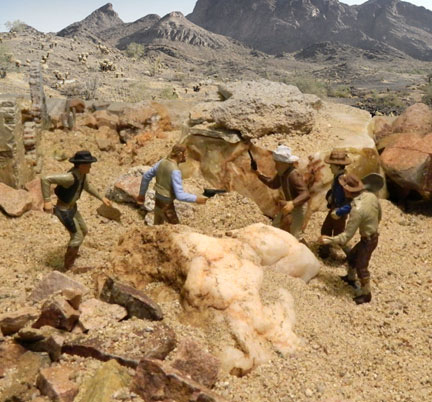 a couple of miners are "relieved" of their hard won goods at gun point... 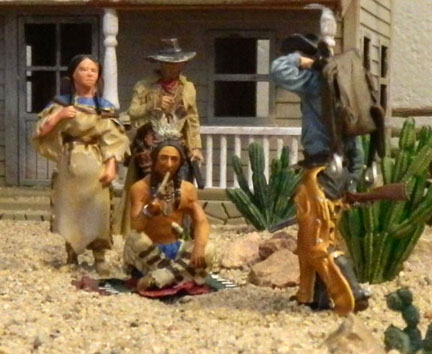 These scenes depict typical drama of a trading post in the old west. Traders, trappers, cowboys, indians and some mor eunsavory and possible dangerous characters. 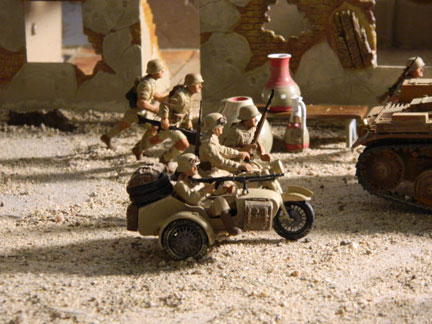 side car motorcycles were used extensively by the German army. One of these buggers sure would come in handy in rush hour traffic! 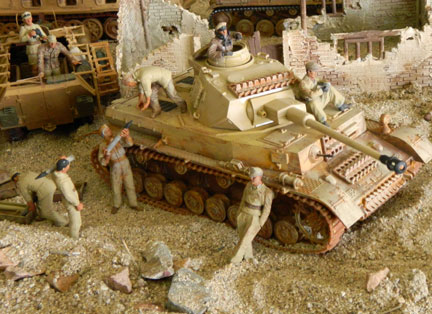 another view of the Mark IV getting re-supplied.